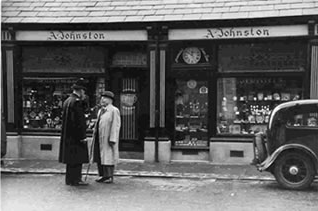 On 24th March 2019, Johnston’s Of Grange, family Jewellers celebrated 80 years of successful trading in Grange-over-Sands, it was on that day 80 years ago when Arthur Johnston bought the business and started trading as A.Johnston Jewellers, which he ran with his wife Laura Johnston, they were joined in the business by their 2 son’s Rodney and Alan in 1963 and 1964.

The next milestone came in 1970 when a partnership was formed between Arthur, Laura and sons Alan and Rodney, and the business was renamed “Johnston’s of Grange”.

Lack of space prevented further expansion, so in April 1979 a second shop was opened in Town House on the other side of Main Street, selling gifts and fashion jewellery.

In 1986, the premises next door to the original shop were purchased, and Town House was sold. Regretfully, Arthur Johnston died in May 1986 and never saw the two shops joined as one.

Alan’s son Gary joined the business in 1990, and in 2001 they formed a limited company between Alan, Rodney and Gary (Johnston’s of Grange Limited). These Days Gary and Rodney are still running the business with the help of Gary’s wife Dawn, who joined in 2011.

In 2017 a brand new website was launched for the business, and for the first time orders could be placed online.

Johnston’s of Grange would like to thank all our customers for their loyalty over the years.

Johnston’s of Grange, Main Street, Grange-over-Sands, in Cumbria is a family jewellers established over 70 years ago, stocking a wide selection of jewellery in gold, silver and platinum, including diamond and gem set. We are famed as a traditional jewellers offering a full repair service for jewellery, clocks and watches.

We carry a large selection of watches, from names such as Rotary, Swatch, Pulsar, Lorus, Timex & Seconda including Seksy, as well as Clocks and Barometers. Replacement battery and straps fitted within...